cancel confirm NSFW Votes: (0 votes)
Are you the publisher? Claim or contact us about this channel.
0
Showing article 16 of 3175 in channel 13789445
Channel Details:
Viewing all articles
Browse latest Browse all 3175
0
0
HABITAT FOR HUMANITY West Hawai`i will soon build a house for a veteran in Ocean View. To help out, Habitat has received at $5,000 Community Impact Grant from The Home Depot® Foundation. On May 18, Habitat will break ground for the new house for an Ocean View vet.
Habitat is recruiting volunteers for the home construction. “We built four homes in Ocean View and look forward to our next build – Our First Veteran Build! We need the support of the community – skilled volunteers, unskilled volunteers, churches, service groups and lunch sponsors – to make it a reality for our new partner family,” said community relations director Margo Takata.
Patrick Hurney, executive director of Habitat for Humanity West Hawai`i, said, “The Home Depot Foundation’s generous donation will help with upcoming repair work and new home construction for veterans. It is through these types of partnerships that we are able to assist our local veterans.”
The Home Depot Foundation’s Community Impact Grants Program supports the work that local nonprofit veteran organizations are doing to improve the lives of veterans and their families. “The Home Depot Foundation is committed to ensuring that every veteran has a safe place to call home,” said Kelly Caffarelli, president of The Home Depot Foundation. “We are proud to work with Habitat for Humanity West Hawai`i in our efforts to give back to those men and women who have so bravely served our country.”
To volunteer, email info@habitatwesthawaii.org or call 331-8010.
VOLCANO HOUSE HOTEL is expected to be fully open next month, according to a statement from Hawai`i Volcanoes National Park. It says that “soon guests will stroll through the lobby, where polished concrete floors of deep jade have been restored to their 1940s luster, and into the Grand Lounge. Flames from the original lava fireplace will warm the lobby and cast flickering light upon the imposing bronze of volcano goddess Pele, sculpted by Honolulu artist Marguerite Blassingame. A few more steps will reveal an expansive, comfortably appointed sitting room with spectacular views of Kilauea and fuming Halema`uma`u Crater beyond large picture glass windows.”
The park statement calls Volcano House, Hawai`i’s oldest – and newest hotel. It reviews the history:
“While temporary shelters on Kilauea predate the 1824 grass hut built by Chiefess Kapi`olani and her entourage, it was in 1846 that Hilo resident Benjamin Pitman, Sr. built a grass house, and christened it ‘Volcano House.’ The name stuck, and the first substantial wooden structure to welcome guests at Kilauea was built in 1877. (Eventually, this one-story building was relocated, repurposed, and currently houses the Volcano Art Center). Famed writers Mark Twain, Isabella Bird and Robert Louis Stevenson were among guests in the 1877 building, as were King David Kalakaua and French microbiologist Louis Pasteur.
“In 1895, Greek-born George “Uncle George” Lycurgus acquired the Volcano House, and several structural evolutions ensued, including the construction of an ornate, two-story, Victorian-inspired building that served many distinguished guests. Visitors included President Franklin D. Roosevelt in 1934 (the first U.S. president to visit Hawai`i), Amelia Earheart and Princess Victoria Ka`iulani,” says the history provided by the park service.
"In 1940, a fire from an oil burner destroyed the Victorian-style Volcano House. No lives were lost, but the entire hotel was a complete loss. Undaunted, Uncle George negotiated the construction of a new hotel with the park some 200 yards from its former site. In late 1941, the new Volcano House, designed by Maui-born architect Charles W. Dickey, was unveiled with great fanfare on the crater rim – and it is unveiled again in 2013 in the historic character of the 1940s. Uncle George’s name, flair for hospitality, and affinity toward volcano goddess Pele, will continue to define the character of Volcano House."
The 33-room hotel is owned by the National Park Service and is managed under contract by Hawai`i Volcanoes Lodge Company, LLC, who also manage Namakanipaio Campground and ten A-frame cabins.
“While the views from Volcano House of the active volcano may be distracting, the careful observer will note the restoration of canec ceilings in the comfortable guest rooms, appointed with historic crown moldings. Prints by local artist Marian Berger of native birds in the Audubon style of the era adorn the walls. Original tiled hearths in three rooms were upgraded with electrical fireplaces,” says the park statement
Outside, two new decks overlook Kilauea caldera. Indoors, guests can “have a seat at the lovingly restored original koa wood bar in Uncle George’s Lounge, where another bronze sculpture depicting Pele’s vengeance graces a historic fireplace.
“If Uncle George were alive today,” says the statement from the park, “perhaps he’d marvel over the coincidental return of Pele to her home at Halema`uma`u Crater, which began to erupt again in 2008, and to the return of guests to historic Volcano House.” 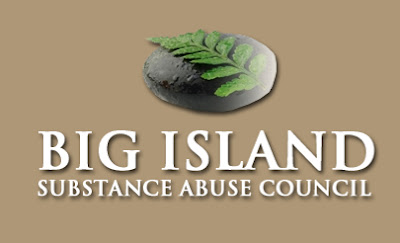 BIG ISLAND SUBSTANCE ABUSE COUNCIL is shutting down offices, and 20 employees around the island will lose their jobs. The organization has worked closely with the Hawai`i Paroling Authority and Drug Court to provide counseling to drug and alcohol offenders through its Therapeutic Living Program. However, it has lost about 60 percent of its funding, according to its CEO, Hannah Preston-Pita.
To raise money for programs, Kamehameha Schools Hawai`i Campus has offered a venue for a Recovery Day on Aug. 3 from 9 a.m. to 4 p.m. Events include a strong-man competition, dance competition, a wellness fair and cooking demonstrations. Admission to Recovery Day is free.
AIR QUALITY IMPROVED TODAY after several hours of bad air descended on Hawai`i Volcanoes National Park Visitor Center and Volcano Art Center yesterday. It was the third day with SO2 levels reaching unhealthy levels, but for far less time yesterday than previous days. Jaggar Museum had good air all day, following periods of bad air on Tuesday.

HIKING OVER LAVA IN THE HOT SUN with volcanic emissions in the air can be deadly. Near Kalapana Gardens, a tourist, 57 years of age, from Victoria, British Columbia collapsed and died on Tuesday after a day-long hike. According to police reports, they were not carrying a cell phone and were somewhat lost on the lava. The victim’s companion left for help, and the man’s body was found by fire rescue crew aboard a helicopter.

AN IDENTITY THEFT SCAM is in the radar of the Hawai`i Police Department, which is warning residents about emails. The fake messages warn recipients of suspicious activities concerning their accounts and ask readers to click on a link to verify accounts. On the link, the reader is asked for personal information, which, police warn, could be used for identity theft. According to a statement from police, legitimate banks and other financial institutions do not ask for personal information through email or phone.
PUNALU`U RESIDENTS EVAN AND EMMETT ENRIQUES led Kamehameha-Hawai`i to pound Kalaheo High School on O`ahu last night in state Hawai`i Athletic Association Division I volleyball competition. Kamehameha won with scores of 25-22, 25-17 and 25-21 at the match held at McKinley High School. Evan scored 28 kills, and Emmett scored ten kills. Evan also came up with 16 digs. Kamehameha takes on Punahou, the top-seeded school in the state playoffs, at 7 p.m. tonight. The coach for Kamehameha is the two boys’ dad, Guy Enriques.

VOLUNTEER TO PLANT NATIVE SEEDLINGS in the Kilauea section of Hawai`i Volcanoes National Park on Friday, May 17 from 8:30 a.m. to 3 p.m. The activity, sponsored by Friends of Hawai`i Volcanoes National Park, provides education on the park’s native forest restoration program. Volunteers must be 12 years of age or older and able to hike a mile over uneven terrain through brush on a moderate slope. Scrub soles of shoes before arrival to ensure dirt and invasive species are kept out. A crew of at least a dozen people is needed and must pre-register at forest@fhvnp.org or call 352-1402.