cancel confirm NSFW Votes: (0 votes)
Are you the publisher? Claim or contact us about this channel.
0
Showing article 19 of 3123 in channel 13789445
Channel Details:
People Here Also Viewed:
Loading ....
Viewing all articles
Browse latest Browse all 3123
0
0
KAU’S U.S. REP. TULSI GABBARD went on national television this morning asking for a new way to handle sexual assault accusations in the military. Gabbard, herself a member of the National Guard and a veteran of Middle East combat, talked about recent revelations that the number of accusations of rape and other sex crimes in the military is on the rise. She was interviewed by Candy Crowley on CNN’s State of the Union along with U.S. Rep. Tammy Duckwork, another National Guard member, veteran of Iraq, helicopter pilot and double amputee.
“It is not enough to say it is unacceptable,” said Gabbard. The response to accusations of sexual assault in the military “has to be a victim-centered response that is safe, transparent and responsible.”
Gabbard and Duckworth described sexual assault as a power issue, not a sex issue. With the military tradition of power and rank, it can be fixed, they said.
However, reporting sexual assaults has led to retaliation in the ranks. The atmosphere for women soldiers has been one of having to travel in buddy teams, not going out alone, even when a woman thinks she should be safe with her military colleagues. Gabbard said that sexual predators “seek out weak targets. I was not a weak target,” she noted, saying that she did not experience inappropriate sexual aggression during her time on duty.
Both Gabbard and Duckworth said the Uniform Code of Military Justice has not been able to solve the problem. They called for independent investigators for such cases and a code that will prevent commanders from overturning the outcomes.
The two also noted that almost half of the sexual assault victims are men. They said that such assaults on women and men are a betrayal to the unit, the military and the nation, not only the victim.

AGRICULTURAL TOURISM is on the agenda for the Leeward Planning Commission meeting scheduled for Thursday, May 16 at 9:30 a.m. at West Hawai`i Civic Center. The initiator is the County Council, which wants to amend Chapter 25 of the Zoning Code to “clarify definitions, procedural guidelines and requirements, and standards related to agriculture tourism operations.” The rules for ag tourism have been debated at the County Council and its Planning Committee with testimony from the public for more than a year. County Council member Brenda Ford asked, “Will this bill result in new food crops growing on the island, or will this bill be for people who want to cash in and be part of the tourist industry?”
During hearings, neighbors of ag tourism activities talked about crowded roads, lack of parking and noise, along with such activities as loud music and parties that don’t have anything to do with agriculture.
Ford pointed out that 15,000 visitors a year would average 40 people a day. People in rural areas “don’t want to be in an urban area with buses coming next door to our properties,” said Ford. “When you get to 30,000, that is 82 people a day.” Imagine 30- something a day vehicles coming to your neighbor’s property,” she said. “Urban traffic going in and out of a little private road,” in some cases, she said.
“I am for ag tourism,” she said, but called for regulation.
Previous discussions included keeping weekly or daily numbers of visitors going to ag tourism destinations and requiring a plan approval for locations with larger numbers.
Planning director Bobby Jean Leithead-Todd said up to 30,000 visitors a year are allowed under current county ordinance. A plan approval with drainage study for new construction is required for operations with that many visitors expected.
Leithead-Todd noted that farm stands are separate issues under county and state law and are permitted use – they are not ag tourism, she said.

AN INNOVATIVE TRAINING PROGRAM by the U.S. Department of Defense will bring 75 military reservists to Ka`u June 4 - 12 to provide free medical care in clinics open to the public.
Tropic Care 2013 will run two clinics, at Ka`u High & Pahala Elementary School and Ocean View Community Center. Clinics will be open from 8 a.m. to 4 p.m., closing early at 12 p.m. on the final day, June 12.
Health care services that will be provided free of charge include physical exams, dentistry, optometry (exams and glasses), medication review and provision of some medication, and nutrition education. Patients will be seen on a first-come, first-served basis and are advised that there may be long wait times.
“This is an opportunity to bring needed medical, dental and vision services to the district of Ka`u,” said Aaron Ueno, Hawai`i District health officer with the state Department of Health. “These services are open to the entire island, and we are hoping to do this again in the future with community support.”
Tropic Care 2013 is a partnership between the U.S. Department of Defense and the state Hawai`i District Health Office, supported by the County of Hawai`i and Ka`u Rural Health Community Association. It is an exercise of the Department of Defense’s Innovative Readiness Training program, which challenges reservists to plan and implement rapid mobilizations to distant and unfamiliar areas.
“We thank the Department of Defense and all the reservists for coming to Hawai`i Island and reaching out to our residents,” said Karen Teshima, executive assistant to Mayor Billy Kenoi. “This innovative program will benefit everyone involved and will further our goal of keeping our community safe and healthy.”
Other community partners collaborating to bring this service to Ka`u are the Hawai`i Department of Education, Ocean View Family Health Center, Hui Malama Ola Na `Oiwi, Bay Clinic, Hawai`i Island Cardiovascular, Hawai`i Island Community Lung Assessment Science Studies, Ocean View Community Association, Kona Community Hospital, Hawai`i Police Department, Hawai`i National Guard’s Youth Challenge Academy, Ka`u Hospital, Pacific Quest and the Veteran’s Administration.
For more information on Tropic Care 2013 or to request special assistance or an auxiliary aid seven days prior to the event, call (808) 974-6035 or email Martha Yamada of the Public Health Nursing Section at martha.yamada@doh.hawaii.gov.

KA`U RESIDENTS ARE URGED TO PARTICIPATE in this week’s county government meetings from Ocean View Community Center’s remote videoconferencing site, which Hawai`i County Council is considering closing down due to lack of use. A special meeting of the Council, focusing on the budget for the next fiscal, takes place tomorrow at 8 a.m. at Council chambers in Hilo. The Council’s regular meeting begins Wednesday at 9 a.m., also in Hilo.
Agendas are available at hawaiicounty.gov. 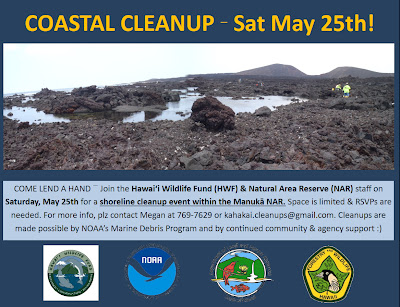 HAWAIIAN VOLCANO OBSERVATORY FOUNDER Thomas Jaggar comes to life Tuesday when Ka`u resident Dick Hershberger presents the living history program A Walk into the Past. Programs begin at 10 a.m., 12 p.m. and 2 p.m. at Kilauea Visitor Center in Hawai`i Volcanoes National Park. Participants then walk across the road to the Whitney Vault, an underground room containing original equipment used by Jaggar in his research on Hawai`i’s volcanoes.

WHOSE FOOTPRINTS ARE THESE REALLY? is the question discussed at After Dark in the Park this Tuesday. Research suggests the story behind the fossilized human footprints in the Ka`u Desert may be more complex than originally thought. Footprints found in desert ash layers were believed to have been created in 1790 by the army of the Hawaiian Chief Keoua on their way back from battle. While in the area, Kilauea erupted, sending suffocating ash down on one group. Others made it out alive, leaving their footprints in the then-wet ash. The ash dried, forever memorializing this event – or did it? Dr. Jadelyn Moniz-Nakamura examines geologic evidence that may indicate much more prehistoric activity in the area. The program begins at 7 p.m.  at Kilauea Visitor Center Auditorium in Hawai`i Volcanoes National Park. $2 donations support park programs.

No scan issues, but warning message

Man stabbed in the torso in Saffron Lane, Leicester

Re: If a three digit number xyz has 2 factors, how many factors does the

Places in Town Board Game

Under Armour® is Hot for the Holidays

Back Into The Closet: From why we have Clueless to thank to the costume Drew Barrymore absolutely hated, all the wardrobe secrets from Santa Clarita Diet

'It doesn't matter how tall of a wall you put up': Trump's border-wall plan is still full of holes