cancel confirm NSFW Votes: (0 votes)
Are you the publisher? Claim or contact us about this channel.
0
Showing article 26 of 3177 in channel 13789445
Channel Details:
Viewing all articles
Browse latest Browse all 3177
0
0
FORMER STATE REP. DAVID TARNAS is the new chair of the Democratic Party of Hawai`i County. Tarnas was elected during the organization’s annual convention yesterday at Volcano Art Center’s Ni`aulani Campus in Volcano Village.
“My main goal is to facilitate communication among party members, party officials and elected officials,” Tarnas said, according to a Stephens Media story by Nancy Cook Lauer. “My goal is to grow the party and to increase public participation in the political process.”
Tarnas replaces Steve Pavao, who stepped down after serving as chair for four years.
Gov. Neil Abercrombie, Sen. Brian Schatz and Rep. Colleen Hanabusa were among those attending.
See more at hawaiitribune-herald.com.

“THERE IS NO LONGER A NEED TO RUSH any renewable fuels project that comes along,” according to a response from the County of Hawai`i to a question posed by the state Consumer Advocate regarding the county’s testimony on the proposed contract for `Aina Koa Pono to sell biofuel refined above Pahala from biomass grown in Ka`u to Hawai`i Electric Light Co. The Consumer Advocate asked the county “what (price) premium might be reasonable to consider for approval in order to further the state’s migration away from imported petroleum.”
“At a 40 percent and higher level of renewable energy generation, the Big Island has met and exceeded its stated obligations for renewable energy,” the county responded. “This provides an opportunity to provide great service to the rest of the state as well as to the nation by shifting focus to concentrate on good biofuels projects that deliver economic advantages to Hawai`i’s people.
“The Big Island can move sanely forward to demonstrate a high level of sophistication in the renewable energy field by being selective and insisting that all future projects demonstrate improved economics for the ratepayers through lower electricity costs. 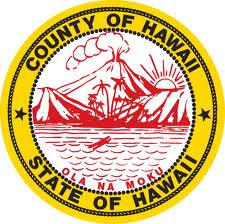 “In fact, the Big Island is ready to be the proving ground for both renewable and cost-effective transportation and power generation – if given enough time and proper breathing-room. Only through strict adherence to this requirement will economically sustainable projects be developed. Demonstrating that costs can be reduced in the current, high-priced utility markets of Hawai`i is but the first step in demonstrating that such projects will also be economically sustainable in much bigger, lower cost markets – whether on the mainland or elsewhere. Projects that perpetuate or increase costs in the current Hawai`i environment will not be competitive elsewhere – and hence will fail. They will fail as businesses and as enterprises that seek to meaningfully address global energy concerns such as greenhouse gas emissions and climate change. A project that increases costs for Hawai`i ratepayers therefore serves no one: it neither lowers rates for Hawai`i’s long-suffering ratepayers, nor does it demonstrate economically useful technology for other markets and for global improvement.
“As a result, the appropriate (price) premium for this, or any other project, is negative. The respectful request is made that the state consider, as a matter of policy, that new projects benefit Hawaiian ratepayers by meeting the following criteria:
According to Hawai`i County, “the Consumer Advocate’s question does raise an important strategic policy issue for the state – one that continues to be widely accepted as a matter of faith based on understandable concerns and well-intentioned policy. State law, the Hawai`i Clean Energy Initiative, the Hawai`i Bioenergy Master Plan, federal agency determinations and other stated policies declare that energy ‘security’ and ‘self-sufficiency’ are the highest priority objectives for state policy, and that these concerns justify consumer price premiums.

“These are understandable and legitimate concerns for an island that is as far removed from large continents as any population center on the planet, especially when people are subject to risks of natural disasters (hurricanes, tsunamis, earthquakes) and political shocks (war, volatility in petroleum prices). Development of biofuels and renewable energy has made great strides on the islands and globally, and many talented and intelligent people have devoted significant brainpower and investment to energy policies as they pertain to the Islands. Given the tremendous progress that has been made, it is a good time to re-evaluate implications of these policy objectives based on what has been learned. Should it choose to do so, the Commission is in an excellent position to consider such a re-examination as it evaluates this docket.
“The first question is: what are the implications of self-sufficiency and energy independence as primary policy objectives, and do they make sense at the state level, considering their vast economic ramifications. Security issues are indeed of concern.
In the event of a natural disaster, what goods and services are most important to the people and what will be most at risk? One might consider that food, water and medical supplies are probably the highest priority. Fuel and energy are also important, yet which of these will be of foremost importance in an emergency? If a natural disaster wipes out major fuel importation ports, what is the likelihood that on-island feedstocks, biofuel generation plants, and/or electricity generation stations will also be wiped out? Does on-island fuel self-sufficiency really produce greater security? In the event of such an on-islands catastrophe, will it be faster to restore a damaged port or the multiple facilities that are each critical links for an on-island fuel supply chain? Must each island be self-sufficient in energy in the event that ports are damaged? If the repair of disrupted ports is the gating factor to restoring fuels supplies, then does it matter whether the fuels that are subsequently brought in come from another island or the mainland? What is at greater risk in the event of a catastrophe: on-island crops and fuel/power generation facilities, or shipping lanes bringing fuel that can be sourced throughout the world? These questions deserve greater re-examination. The answer could be that ‘self-sufficiency’ is not necessarily and inextricably hard-wired to ‘security,’ and that a mixed supply approach (some on-island, some off) could be the optimal mix to minimize citizen risks from a major catastrophe.”
More testimony will be covered in future Ka`u News Briefs. All testimony is available at puc.hawaii.gov.


KA`U HIGH’S MARLEY STRAND-NICOLAISEN is one of four recipients of the 11th annual Roy Fujimoto Athletic Scholarships. Senior student-athletes are chosen for the scholarships based on their athletic and academic achievement and community service.
Strand-Nicolaisen participated in volleyball, track and field and soccer at Ka`u High. This year, she led the Trojan girls volleyball team to the BIIF title and to the state tournament. She also was selected for the All-BIIF first team three times and twice received Division II Player of the Year honors.
She was also selected for All-BIIF first team three times in track. This year, she took first place in high jump, long jump and triple jump. At the state meet on O`ahu, she took second place three times.
Strand-Nicolaisen plans to attend University of Hawai`i – Hilo, where she will major in biology and play volleyball for the Vulcans.
HAWAI`I COUNTY POLICE DEPARTMENT holds a community meeting Tuesday from noon to 2 p.m. at Na`alehu Community Center. The purpose of the meeting is to allow the public to meet the Police Department’s command staff and to discuss concerns with the police chief and commanders who oversee police operations in Ka`u.
To aid police commanders in focusing on specific concerns, it is requested that participation be limited to persons who live or work in the Ka`u District.
Those interested in participating but unable to attend may call Captain Andrew Burian at 939-2520, stop by the Ka`u police station in Na`alehu or e-mail their concerns or comments to copsysop@hawaiipolice.com.
MALIA MACABIO AND AMY KAAWALOA demonstrate how to make the Hilo style of lei Wednesday from 10 a.m. 2 p.m. on Kilauea Visitor Center’s lanai in Hawai`i Volcanoes National Park. Hilo-style is made by twisting two strands of ti leaves together. Hula dancers use lei la`i (ti leaf lei) to adorn their wrists and necks. Part of Hawai`i Volcanoes’ ongoing `Ike Hana No`eau: Experience the Skillful Work workshops.