cancel confirm NSFW Votes: (0 votes)
Are you the publisher? Claim or contact us about this channel.
0
Showing article 271 of 3439 in channel 13789445
Channel Details:
Viewing all articles
Browse latest Browse all 3439
0
0
NA`ALEHU BORN BOBSLEDDER Justin Kripps is set to captain an Olympic four-man bobsled team this Saturday, Feb. 22 in Sochi. The son of Ka`u residents Libby and Robert Kripps, he is a member of Team Canada but attended first through seventh grade at Na`alehu School. Kripps earned a track and field scholarship at Simon Fraser University in Vancouver and was asked to try bobsledding. He made the Olympics team in 2010 and, at age 27, became a bobsled captain and pilot for these Olympics. He drives the two-man sled named for Poliahu- Hawai`i's snow goddess and the four-man sled named for Pele - Hawai`i's fire goddess. Kripps' parents said they plan to watch the competition online from Ka`u. His team took sixth in the two-man. In related news, an online photo of his team in their underwear was blocked by Russian censors.
To comment on or “like” this story, go to facebook.com/kaucalendar.

MONEY TO FIGHT COFFEE BERRY BORER is on the line at the state legislature. The state House Finance Committee will hear the bill tomorrow at 11 a.m. The bill would provide $3 million to the state Department of Agriculture. Its chair, Scott Enright, submitted testimony: “Invasive species are a primary threat to Hawai`i’s agriculture and economy. The coffee berry borer poses a significant problem for coffee farmers in Hawai`i, and the additional funds will help the Department in its effort to contain the infestation.”
UH Chancellor and Agriculture Dean at Manoa both weighed in, supporting the funding to include their partnership and work on the problem with the state ag department.
Department of Land & Natural Resources chair William Aila pointed out that management of feral coffee trees is part of the solution. He said the DLNR supports the spending of $3 million “provided that this appropriation does not replace or adversely impact appropriations for other priority invasive species projects across the State.”
Hawai`i Farm Bureau Pres. Chris Manfredi testified that “Coffee is one of Hawai`i’s signature crops; one that helps bring fame and tourists to Hawai`i. Coffee Berry Borer threatens the entire Hawaiian coffee industry. While the full tally is yet to be made, farms on Hawai`i Island have experienced deep losses. Some have failed. Moreover, large quantities of coffee have been downgraded due to insect damage, reducing the value of the remaining crop. CBB is a serious threat to Hawai`i's agriculture industry and the state's economy. While CBB is battled worldwide, no other coffee growing origin shares Hawai`i's high labor costs and restrictions on pesticides that may be used elsewhere to fight this destructive pest. This places the industry at a competitive disadvantage when compared to the rest of the coffee-growing world.”
Hawai`i Coffee Association, Kona Coffee Farmers Association, Kona Coffee Council and Hawai`i Farmers Union United submitted supportive testimony. Jim Wayman, of the Coffee Association, called it “an emergency situation.” He wrote, “It is like putting out a forest fire in that it all most be contained or it will continue to spread.”
Testimony came not only from Big Island coffee growers who are plagued by the pest. It came from growers on Kaua`i, Maui, Moloka`i and O`ahu who are afraid it will reach their orchards.
East Ka`u member of the state House of Representatives, Dennis Onish was one of the authors of the bill.
To comment on or “like” this story, go to facebook.com/kaucalendar.
KA`U COFFEE FESTIVAL & HAWAI`I TOURISM AUTHORITY. The annual report of the Hawai`i Tourism Authority has been sent to the state legislature and includes a section of the Ka`u Coffee Festival. The HTA reports that “Chris Manfredi has been organizing this festival since its inaugural event five years ago. He is in charge of everything from planning and budgeting to promotion, marketing and fundraising. Chris has helped to grow the festival from a weekend event to a week-long celebration, providing more opportunities for local businesses to participate and more visitors, including a Japanese tour group, to experience this unique festival.” 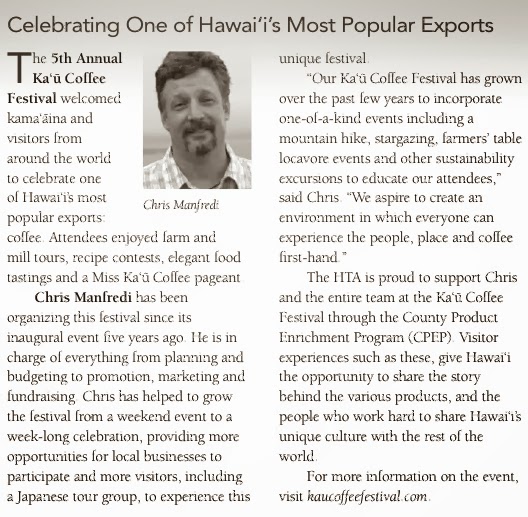 The report quotes Manfredi: “Our Ka`u Coffee Festival has grown over the past few years to incorporate one-of-a kind events including a mountain hike, stargazing, farmer’s table locavore events and other sustainability excursions to educate our attendee. We aspire to create an environment in which everyone can experience the people, place and coffee firsthand.”
Hawai`i Tourism Authority states in its report that the agency “is proud to support Chris and the entire team a the Ka`u Coffee Festival through the County Product Enrichment Program. Visitor experiences such as these, give Hawai`i the opportunity to share the story behind the various products, and the people who work hard to share Hawai`i’s unique culture with the rest of the world.”
The Ka`u Coffee Festival is scheduled for May 2 – 11. The next organizing meeting for volunteers is this coming Tuesday, Feb. 25 at 6 p.m. at Pahala Community Center. To donate or volunteer, call Manfredi at 929-9550.
To comment on or “like” this story, go to facebook.com/kaucalendar.

UNMANNED DRONES may be in the future for monitoring drought, finding livestock, checking waterlines and the health of native forests. A bill in the state legislature, however, would prevent police from monitoring people with drones, without due process. One version would limit drones to police and has drawn a lot of testimony from hobbyists and those wanting to use small drones for agriculture, conservation and sports. The DLNR wants to use them to manage wildfires and to map coral reefs. Sen. Clayton Hee said he will amend Senate Bill 2606 SD1 to allow these uses, according to an Associated Press story by Sam Eifling.
To comment on or “like” this story, go to facebook.com/kaucalendar.
STATE SUPREME COURT NOMINEE is Mike Wilson. Gov. Neil Abercrombie made the announcement yesterday. Before working in state government as Consumer Advocate and director of DLNR, and becoming a judge, Wilson practiced civil rights and criminal law. He was a leader in the environmental groups Protect Sandy Beach and Hawai`i’s Thousand Friends.
Abercrombie quoted Wilson who told the governor, “The Supreme Court is our public conscience.” The appointment will require a vote by the state Senate. To comment on or “like” this story, go to facebook.com/kaucalendar.

HAWAIIAN LANGUAGE AND CULTURAL EDUCATION THROUGH IMMERSION received a boost yesterday. The state Board of Education voted to create an Office of Hawaiian Education under the statewide school superintendent to administer Ka Papahana Kalpuni Hawai`i. The new written policy of the DOE is to “create and implement appropriate curricula, standards, performance assessment tools and professional development.”
Testimony supporting the new policy came from students who wrote in the Hawaiian language as well as parents and educators.
Cheryl Lupenui, sho chairs the student achievement committed for the BOE, told Nanea Kalane, a reporter for the Honolulu Star Advertiser, that the policy change “is really long overdue, to be able to take a look at truly the best public education system that we can have for our students … and the need to ensure that there is an ability to learn through our Hawaiian language, our Hawaiian content, our Hawaiian context in service to preparing all of our students for college, career and community success."
The school with the most Hawaiian language education closest to Ka`u is at Miloli`ihipu`u Virtual Academy. South Kona and Ka`u are considered to have high populations of Hawaiians and part-Hawaiians with families having been rooted in these lands for many generations. To comment on or “like” this story, go to facebook.com/kaucalendar.

SPAGHETTI DINNER & SILENT AUCTION to raise money for the Ka`u Hospital ER is this Saturday from 4 p.m. to 7 p.m. at Na`alehu Community Center. Ka`u Red Hat Ladies and Ka Lae Quilters are the sponsors. Tickets are $9.99 from Pahala Quilting and Ka`u Rural Health Clinic.

SEN. RUSSELL RUNDERMAN’S TOWN HALL MEETING will be open to the public next Monday, Feb. 24 from 6 p.m. to 7:30 p.m. at Pahala Plantation House on the corner of Maile and Pikake Streets. Light refreshments will be served. Call 808-586-6890 or email senruderman@capitol.hawaii.gov. 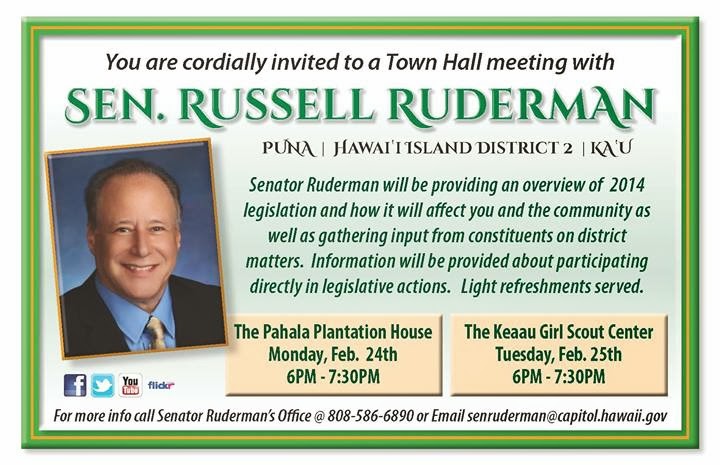